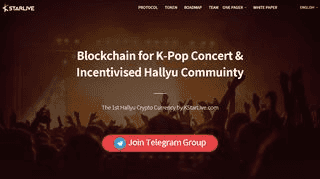 Add to Watchlist
KStarCoin is KStarLive’s ERC20 based cryptocurrency that will allow KStarLive to connect fans of Hallyu around the world to Korea. KStarCoin will be integrated into KStarLive's upcoming incentivized platform for our 8.5 Million subscribers.

Our Project will create immense value for the fans of Hallyu. Using blockchain technology, we will be able to accurately reward users for their activity on the KStarLive platform. Any activity that generates traffic (such as creating content, reading, sharing) will be rewarded. Currently, fans of Hallyu are creating valuable, high-quality content on SNS platforms but the monetary value is retained by the platforms. Through KStarLive's platform, value will be distributed in a logical and proper manner to its rightful owners.

With KStarCoin, fans of Hallyu will have access to services and products such as K-Pop concert tickets, K-Pop concert & fan meeting crowdfunding, K-Star goods as well as methods for fans to send gifts to their favorite stars.

KStarCoin will solve many of the inconveniences and payment issues foreign fans have had while attempting to connect with their favorite stars.

KStarLive.com Reaches 7.5M Followers on Facebook and Breaks through as the Top Hallyu Related Page on Facebook.

Partnering up with K-Beauty Product Supplier.

Start of Facebook and Other SNS Live Broadcast by K-Star.

Partnering with SBS, MBC, and Other Stations for New Idol Survival Programs.

Holding a K-Pop Concert for Global Fans, Partnering up with Broadcasting Channel(s).

Upcoming
MediLOT
MediLOT is a health data protocol that aims to solve the concerns of Electronic Health Records (EHR). Current EHR systems are fragmented, centralised and lack patient ownership. Through a dual blockchain solution, MediLOT incorporates Artificial Intelligence capabilities onboard its control and data layers which allows the equitable sharing of health data. The MediLOT ecosystem will consist of patients, healthcare providers, researchers and commercial companies.

Upcoming
Bithemoth
Here at Bithemoth, we strive for excellence and the development of the blockchain world. Through a vigorous and highly intensive process, we selected strong and innovative leaders to become apart of the Bithemoth family and project. Our team stretches across the globe and with a diversity of strengths we will be able to make a huge impact in the blockchain world. Our ecosystem will include: 1. A Decentralized Digital Asset Exchange  2. Enhanced and Revolutionary Security and Features  3. A complete Marketplace and Trading Platform  4. Fully supported ICO incubator  5. Dedicated Support Systems and Infrastructure  6. The Development of Brick and Mortar Locations

Upcoming
RAVELOUS
Ravelous is the crypto ecommerce marketplace that lets users sell their stuff online for crypto. Sellers can accept many types of payments from buyers, and withdraw your balance in the token of their choosing. Buyers who do not have the currency the sellers prefer can exchange their coins for RAVE tokens which used for payment. The RAVE tokens can also be traded for other coins, and will have a value backed by the crypto-marketplace and the RAVE treasury that will increase over time as the treasury grows in value.

Pre-Sale
Crypto APIs
Crypto APIs is the backbone of any project in a Billion dollar blockchain industry. Our mission is to help with the Crypto & Blockchain adoption by giving the community the opportunity to build any idea faster and cheaper. We build developer-friendly infrastructure, and scalable tools that give everyone the ability to create amazing products that solve big problems.

Active
Bitcoin Asia
World's First Crypto based Travel package Company, Now Book your entire Vacation through Cryptocurrency. It's a decentralized peer-to-peer cryptocurrency for Travel And Tourism Industry. The token holders will be rewarded with various benefits on travel and tourism products. Bitcoin Asia online platform can be used to book an entire vacation with cryptocurrency for Asia Continent.