The state Assembly had already passed the bill, which would bar new mining operations powered by carbon-based energy sources for two years. 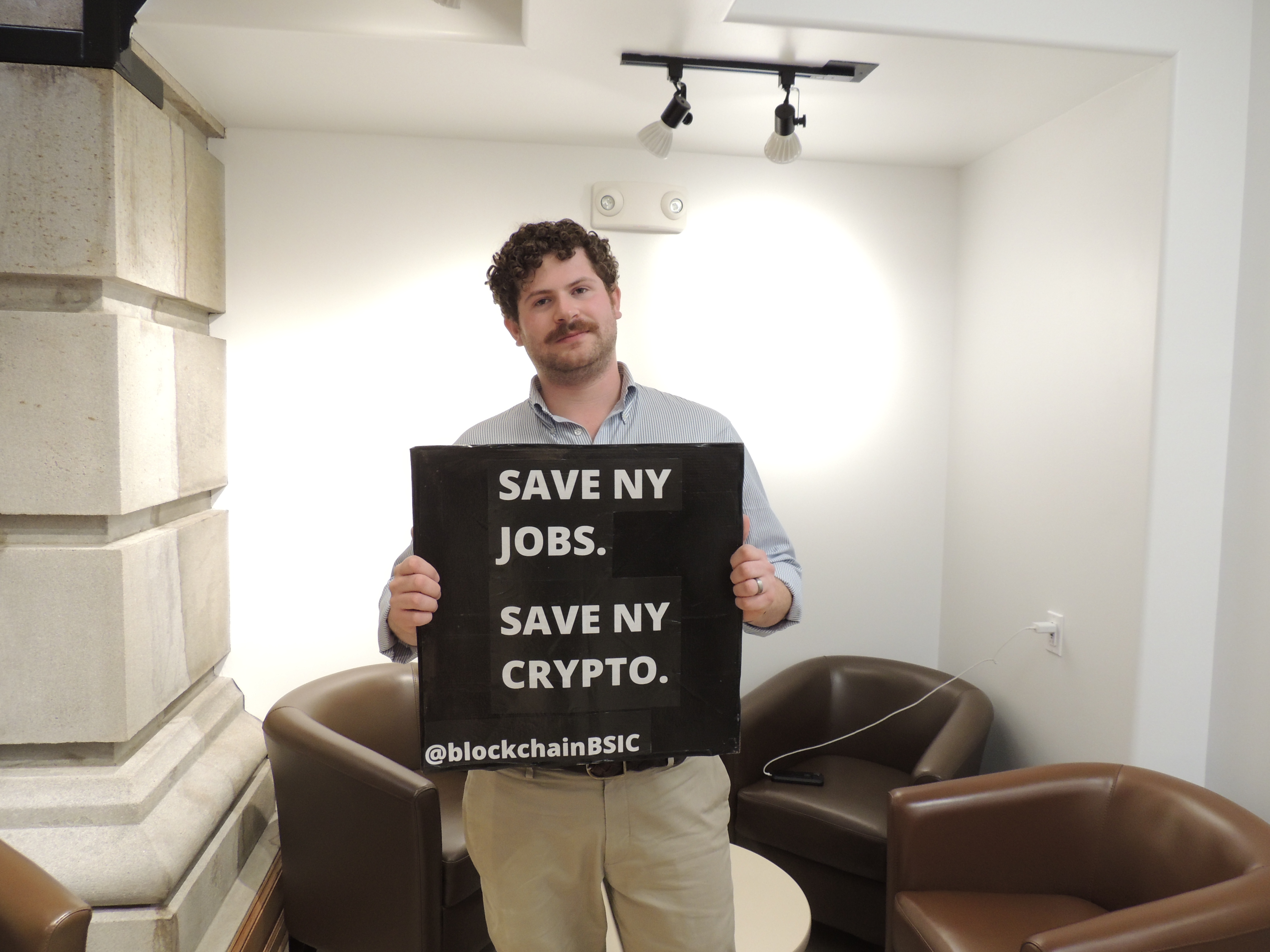 Clark Vaccaro, acting president and chief strategy officer at BaSIC, a local trade organization, holding up a sign after a rally against the proposed bill last month. (Nikhilesh De/CoinDesk)

The New York State Senatepasseda bill targetingproof-of-work(PoW) mining early Friday morning in an effort to address some of the environmental concerns about cryptocurrencies.

The bill, which was passed by thestate Assemblylast month, would impose a two-year moratorium on new PoW mining projects powered by carbon-based fuel in the Empire State, though existing mining firms or ones currently undergoing the permit renewal process would be allowed to continue operations. The Senate voted 36-27 in favor of the bill.

According to the bill's Democratic sponsor, state Sen. Kevin Parker of Brooklyn, there is only one such plant in current operation that wouldn't be affected by the bill. He added that there is one pending application that may be put on hold until the study has concluded.

During the moratorium, the state will conduct a study on the potential environmental impact of proof-of-work mining.

Many had expected the bill to die in committee – the fate met by last year’s version of the bill – after the Senate Environmental Conservation Committeedeclined to considerthe bill during its last meeting of the session. The committee’s chairman, state Sen. Todd Kaminsky, a Democrat from Long Island,told CoinDesk in Maythat he was worried the bill could lead to “deleterious economic consequences for New York if people perceive it as being hostile to crypto.”

However, an eleventh-hour referral of the bill from the Environmental Conservation Committee to the Senate Energy and Telecommunications Committee, where Parker is the chairman, on Thursday evening meant that the bill was able to reach the full Senate floor for a vote mere hours before the close of the legislative session at midnight.

Democratic Gov. Kathy Hochul still needs to sign the bill before it can become law.

New York has long been seen as a place for crypto mining firms to set up because of the state's cheap hydroelectric energy sources. In more recent years, mining firms have also repurposed defunct coal power generation facilities. Greenidge Generation, for example, refurbished one such facility to operate using natural gas.

The crypto industry rallied against the bill after itsAssembly counterpartwas introduced last May, with many industry advocates calling the proposal a “ban” on mining outright.

John Olsen, a lobbyist with the Bitcoin Association, told CoinDesk last month that he feared the moratorium could be extended or turned into a ban over the course of the next two years, which could drive away companies seeking to set up shop near New York’s cheap energy sources.

Mining companies based in New York havethreatenedto leave the state if the moratorium is passed, pointing to the comparative ease of doing business in more mining-friendly states like Texas.

Clark Vaccaro, the acting president and chief strategy officer at industry trade organization BaSIC, told CoinDesk the passage of the bill "is a grim day for blockchain technology, effectively shutting the door on a nascent industry."

Separately, the Senatepassed a billearly Friday that would create a "cryptocurrency and blockchain study task force."