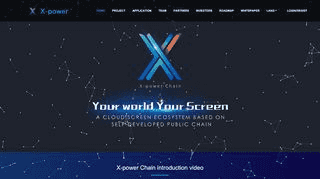 Add to Watchlist
X-power Chain, a public screen ecology platform based on Blockchain technology, is built with screen as the entrance. X-power Chain energizes “public screen” from Blockchain Advertising, Blockchain Content and Blockchain DAPP and creates a public open platform for global users to explore, tap and exploit its potential value. X-power Chain establishes a tripartite win-win model for developers, content producers, content consumers and X-power Chain, and has now cooperated with tens of thousands of global companies, displayed more than 400,000 offline screen terminals, and produced more than 70,000 nodes and daily flow of tens of millions of people, providing guarantee for energizing public scenarios.
read more 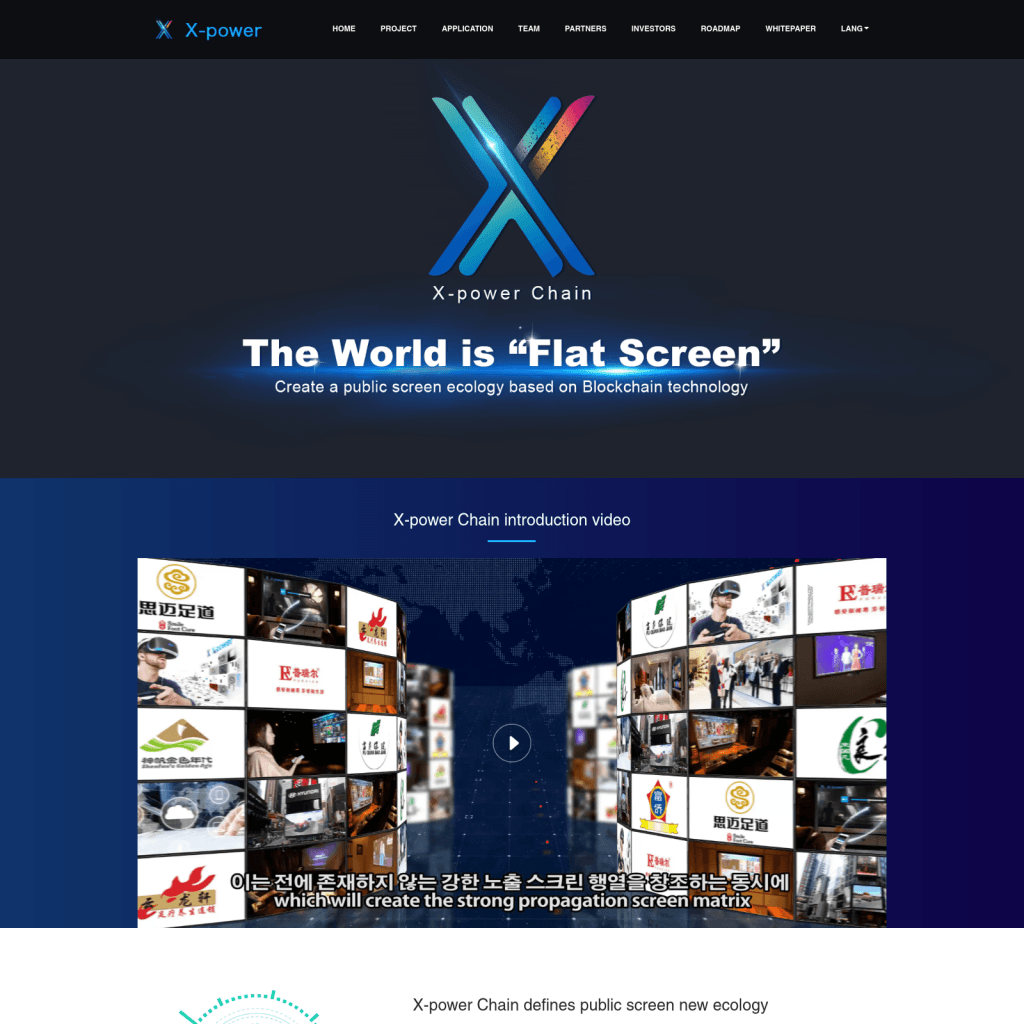 After completion of the entire ecological infrastructure, the Foundation will improve the incentive measures for long-term autonomy.
Timeline of public screen modification in separate scenarios

Launch of KTV and catering scenarios

X-power Chain project has cooperated with more than ten thousands of hotels, KTV, and health clubs throughout the world, deployed more than 400,000 offline screen terminals, created more than 70,000 nodes, had more than daily visitor flow of ten millions, and provided plenty of traffic for the development of public scenario.

Several Blockchain projects were launched on the open advertisement platform, and the advertisement was accurately published on dozens of thousands of screens. The publicity covers more than 100,000,000 person-times of medium to high-end groups.

Upcoming
Allabout.me
A DIGITAL NETWORK USER = A CRYPTOCURRENCY BANK CLIENT Allabout.me is the first social network based on Bitcoin and the internal token of the project ALL.ME. All.me built-in a personal wallet in every user's account. A person creates an account and becomes a client of the internal cryptocurrency bank.

Upcoming
Svandis
The Svandis ecosystem is driven by a community of users and researchers using powerful Svandis tools, analytics, and indicators for professional traders in need of real-time, actionable data and analyses. The Svandis community drives the rapid collection of verifiable data and information through a tokenized incentive system. The platform within the ecosystem provides leading financial research, analytical and visualisation tools for anyone actively involved in the space: short-term and swing traders, traditional holders, analysts, hedge funds, institutional investors, trading firms, and token sale contributors.

Active
Liker
LIKER WORLD is a block-chain-based educational content platform. This is accompanied by a donation policy related to educational projects. Innovation in future education through technology is oriented towards a better society and humanity. Based on the idea that all corporate activities should pursue social values, LIKER has 3 main aspects: TRUST, REWARD, and DONATION.

Upcoming
Innovasis Hotels
Blockchain Hotels will give the community of blockchain enthusiasts and digital nomands a great place to stay and a chance to capitalize on the current opportunities in the hospitality market. The business model employed by Blockchain Hotels allows our investors and guests to benefit from real estate profit-sharing as well as from the token model that is tradable on exchanges. Our system is designed to deliver both short and long term gains. The guest experience is designed to be entertaining, stimulating, and relaxing at the same time. The hotel facility and co-working spaces are designed to bring people together, and feature numerous attractions for guests to enjoy. Blockchain Hotels team prepared exclusive 4 video series where there is everything explained. Here you can watch it: http://bit.ly/videocampaign-blockchainhotels

Upcoming
Emrify Health Passport
Emrify is launching a decentralized Personal Health Record platform on top of the Ethereum public blockchain to deliver trusted health information to the right hands at the right time anywhere in the world. With years of building consumer engagement mobile apps, Emrify is laser focused on collecting and locking up data for each person for complete ownership and control to freely share their data. Our top priority is to create attractive cryptoeconomics models to incentivize health data sharing for all parties. With strategic US partnerships with hospitals and doctors, Emrify is building on top of established prototypes to accelerate the launch of production interfaces to firmly establish the Utility Token in healthcare.

Active
KardiaChain
KardiaChain is the blockchain of blockchains. A scalable and interoperable blockchain platform for decentralized applications. Our Vision: We believe Blockchain can create equal opportunities for people, a world where people have access to opportunity to invest, to start a business, to work and to be socially mobile. Our technology empowers mass adoption, expand use-cases and lay foundation of the blockchain ecosystem. We are building a blockchain platform for decentralised applications helping to create a blockchain ecosystem that allows for scaling and connecting disparate blockchains. Our Core Technology is: - Dual Node - Elastic Sharding With Incentive Mechanism (ESWIM) - Kardia Smart Contract Markup Language (KSML) Our Use cases are: - Supply Chain Management - Fully Decentralised Cross-chain Exchange - Smart City