ICO Ended
10,052 Views
Visit Website
Last screenshot taken on
3 Mar 2020. Website is active
by the 23 May 2021
Add to Watchlist
Cinemadrom this is a combination of many people and areas of activity in one ecosystem. For filmmakers this is Hollywood online.
For investors, these are new tools. For the crypto community, this is a new blockchain technology, a new coin for mining, trading, transfers. For freelancers, these are new jobs. And for the audience, these are new film histories and TV shows with additional new advantages.
Our main goal – it is to create a new, developed, and independent system of the world film industry, in which every film will pay off, and every second will bring profit to its creators and investors! To achieve this goal has been developed - PLATFORM FOR FINANCING, PRODUCTION AND DISTRIBUTION OF CINEMA PROJECTS - BASED ON BLOCKCHAIN TECHNOLOGY.

Users CINEMADROM this: Authors, Investors, Producers, Film directors, spectators, Advirtisers, Partners, Freelancers, Actors, Traers, Miners, Users Blockchain Industry.
For the effective implementation of the program of financing, production and distribution of user projects - has been created a unique ecosystem and structure built on bolokchain technology. All enterprises are connected in a single blockchain network, and automatically interact with each other.

o We reduce the threshold for entry into the production of cinema films to $ 100.
o The opportunity for a short time, to collect the budget for the production of the film.
o Transparent system of accounting and calculations in the film industry.
o The new effective standard of contractual relations based on Smart Contracts.
o Effective insurance system for movie projects.
o An effective complex blockchain system for managing the life cycle of a movie project.
o Three options, the production of film project.
o Guaranteed distribution, for finished film.
o This is a personal multi-currency wallet integrated into user account.
o Cinemadrom combined three algorithms of mining PoW / PoS / PoT.

All users of the platform and participants of the cinema project - (investors, authors, producers, actors, spectators, cinema groups, partners), we provide a program for earning cryptocurrency and fiat money. 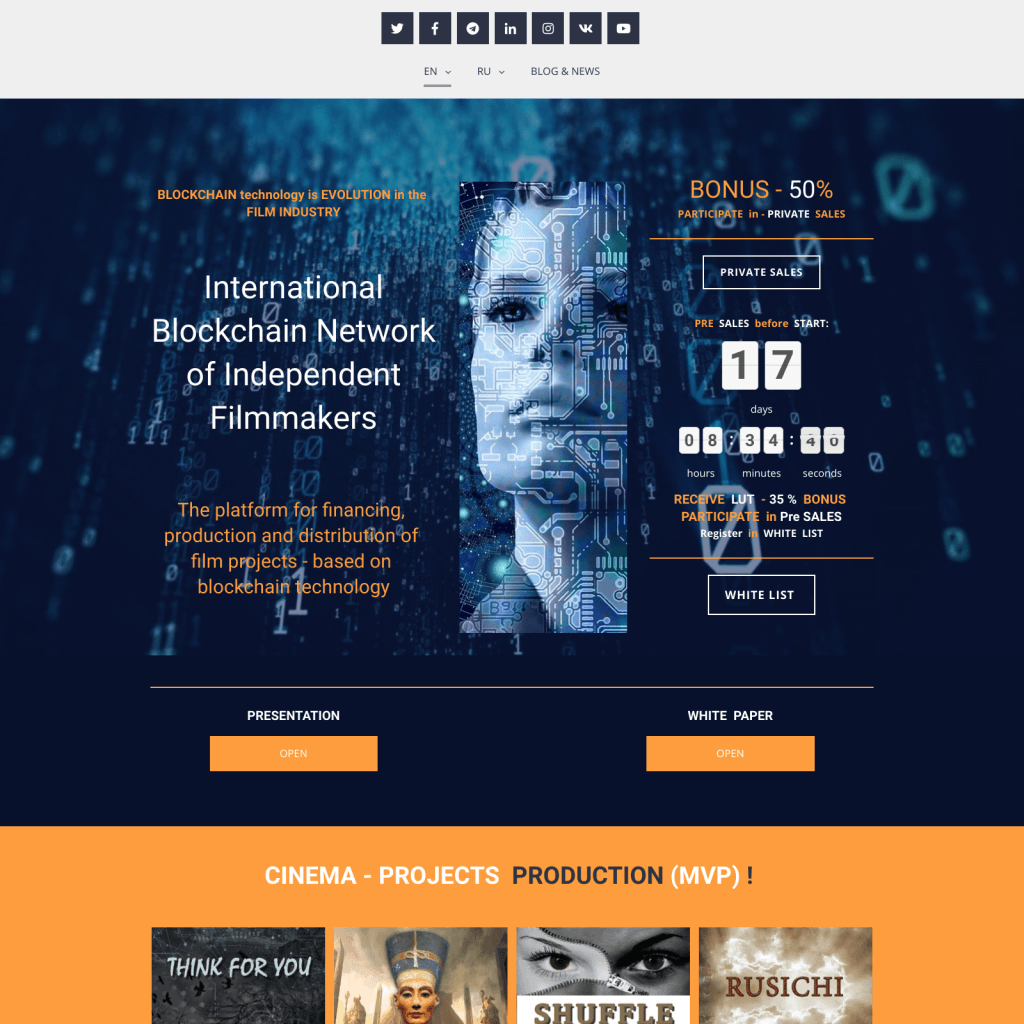 Pre-Sale
UNIMOON
“You’ve got to start with the customer experience and work backwards to the technology. You can’t start with the technology and try to figure out where can I sell it.” -Steve Jobs UNIMOON is tokenizing on Polygon Matic. We are building a layer 1 solution building on substrate and auction for a Polkadot parachain. We will be the first interoperable decentralized social media network partnering with Storj for our decentralized cloud data storage needs. Enabling users to have full ownership and control of their personal information where it is displayed and how it is displayed utilizing blockchain technology for storage of key information. UNIMOON is bridging the gap between web2.0 to web3.0 solving the greatest issue of adoption for blockchain technology in the simplest way possible starting with the user experience.